It stands to reason that any company owner, manager, or CEO would want the best I.T. services for their business. They might read up on the functions of I.T. services, sift through I.T. company...
minute read

It stands to reason that any company owner, manager, or CEO would want the best I.T. services for their business. They might read up on the functions of I.T. services, sift through I.T. company brochures,

listen to presentations, and compare data across several different providers. They may put a lot of effort into making the most logical decision.

Then why is it that so many companies struggle with inadequate I.T.?

The problem is that how you think is just as important as the facts you think about. One way that business leaders sometimes go wrong is by falling prey to their own confirmation bias.

What Is Confirmation Bias?

A confirmation bias is a way of thinking in which you favor information that confirms what you already believe. Whatever you believed before, you continue to believe, even if there is evidence to the contrary.

This can happen in several ways:

How Confirmation Bias Can Affect Your I.T. Decisions

Confirmation bias comes up in I.T. choices a lot. Here are some examples of how it can happen.

About the time Terry became CEO of her hospitality management firm, the managed services provider that they had used for years went out of business. Terry believed strongly that new I.T. companies had

the best perspective on technology issues. So, when she met with a consultant from a newly-formed managed services provider, she was inclined to go with them immediately. Still, she thought it was wise to do more research.

A different managed services provider offered more security services. Another one described ways she could build her business by using more effective technologies. Yet, no matter what she heard from any of them, she stuck to her belief that new I.T. companies were always the best. She hired the new company, but she soon found out that it was a mistake. The managed services provider didn’t have the needed experience to deal with a security threat when it happened, so she lost a significant amount of her guests’ data to cybercriminals. She spent the next year trying to undo the damage of that breach. After that experience, she began to look at MSPs differently. When she hired a managed services provider based on all the facts, her technology situation improved dramatically.

Although Mike understood that today’s businesses can’t operate without adequate technology, he saw

I.T. as simply a practical tool to store and retrieve data for his oil and gas business. When he consulted with an I.T. provider who explained how great I.T. services could help him propel his business to the next level, Mike dismissed it as a kind of outrageous sales pitch. And, after a while, he couldn’t even remember any of the ideas that were presented.

So, he chose a provider who stuck to the practical side of I.T. services. His business plodded on in the usual way, without the benefit of strategic I.T. solutions, until he rethought the situation. With a different MSP that helped him find strategic solutions, his business flourished.

Albert was in charge of making decisions about the I.T. services for his manufacturing company. He believed that the best option for help desk support was to hire a talented help desk person to provide in-house assistance.

A business associate recommended outsourced help desk support as a great option for handling everyday I.T. issues as well as deal with crises. He showed Albert the statistics that showed how well his

outsourced support desk was handling the job. Yet, despite his associate’s success with outsourced I.T., Albert was committed to the idea that hiring someone to work within his company was the best choice.

However, it took Albert over a month to find someone he felt was talented enough to do the job. Then, six months later his I.T. help desk guy got a better offer and moved on. The next one he hired missed work all too often. Yet, Albert continued to believe that if he could just find the right person, his problem would be solved. He ignored the advice of his associate and all the data that went with it. Meanwhile, his other employees were getting extremely frustrated, and a few left. When a crisis happened with a server, no one was there to field the call.

Albert finally realized that he was thinking about the situation in a way that was hurting his business. He changed his mind and took another look at his help desk support situation. After he took a new approach, he was able to find a solution to keep his employees happy.

Could You Be Influenced by a Confirmation Bias?

The truth is that confirmation bias is a part of the human condition. It happens to

everyone from time to time. Sometimes, people selectively seek out, ignore, interpret, or recall data in whatever way they have to in order to maintain their current beliefs.

When it comes to confirmation bias, one main thing separates those who make poor I.T. decisions from those who end up with the best I.T. services. The savvy business leaders stay aware of their own biases so that they can evaluate the data objectively to get the best results.

Are you ready to go beyond ways of thinking that hold your business back from reaching true and ongoing success? If so, talk with a JMARK team member to get a fresh perspective on your views of managed services providers.

You can call us at 844-44-JMARK, email us at [email protected], or leave us a message on our Contact Us page. JMARK is a Springfield, Missouri managed services provider with locations in Missouri, Arkansas, and Oklahoma. We’re here to help you make the most logical, fact-based, objective I.T. choices for your business goals. 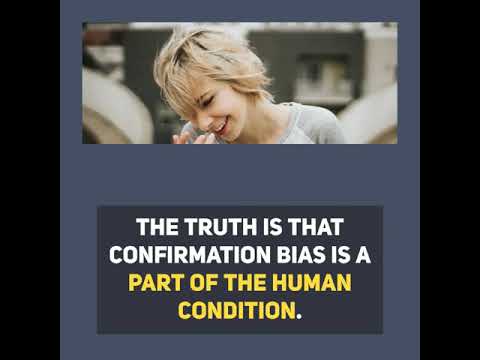 Interested in the rest of our Cognitive Bias blog series? Check it out here!

PREVHow the “Ambiguity Aversion” Hurts Your Business
NEXT The Scary Truth about Printer Company I.T. Services

Our Resources page is where we keep the REALLY good stuff.

Time for a Second Opinion on What’s Ailing Your

Customer service isn’t something we always associate with I.T. After all, managing customer experience seems like a pretty front-line activity, while I.T. is one of those behind-the-scenes elements that, when...

Great Leads to Greatness: The Compounding Effect of Great

﻿ Todd Nielsen: Welcome to the JMARK Business Innovation Technology Experience. Today This is Todd Nielsen. I have with me here Thomas Douglas, Kristina Coon, and Dax Bamborough. Today we...

20 Reasons to Bring Your Employees to JBITS 2020

Can you believe it? 2020 is here. A new year and a new decade. That also means that JBITS 2020 is just around the corner. Which is perfect, because everything...

JMARK is always so knowledgeable and knows what to do without taking too much time. They’re amazing!